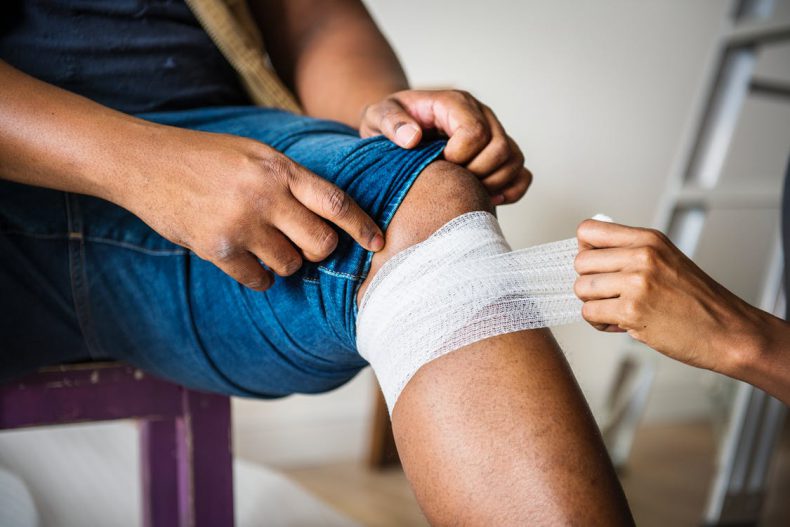 Acute pain is a sensation triggered by a threatening (noxious) stimulus to the skin (cutaneous pain), the musculoskeletal system or the internal organs (visceral pain). A signal is then transmitted to the brain so it becomes aware of the threat and can decide how to respond (fight or flight). Axons travel throughout the body back to the spinal cord. Their pathways look like a tree, where the spinal cord is the main trunk with branches extending out into the body, and twigs and side shoots spreading again so all tissues are reached.

Within the spinal column, there are three plexuses (bundle of nerve roots);

When a painful event happens;
This creates two painful stimulus which travel up towards the dorsal horn of the spinal cord;

These Pain stimuli travel quickly to the substantia gelatinosa in the dorsal horn of the spinal cord where the “gating” mechanism occurs. Pain impulses then cross over to the opposite side of the spinal cord and ascend to the higher centres in the brain via the spinothalamic tracts and on to the thalamus and higher centres of the brain, including the reticular formation, limbic system, and somatosensory cortex.

How does the body inhibit the pain?

There are cells of the substantia gelatinosa that can have a inhibitory influence on T-cells. Pre-synaptic inhibition of nociceptive afferent terminals at the point where they synapse with transmission cells

Pain can be felt when: SG cells are inhibited when nociceptive afferents are activated reducing pre-synaptic inhibition allowing nociceptive information to pass to the brain

These inhibitory T-cells are generated by a sensory activation (rubbing or vibration of injured limb). These T-cells inhibit the nociceptive signal (painful stimulus), preventing the transmission o painful signal up towards the thalamus of the brain.

If you’ld like to research more into this interesting topic then give this video by Dr John Campbell a watch as he goes into greater detail;